The older I get the more hellish I become toward the male species. I blame my cynical nature. At the end of the day I just can't be bothered with some of the things they say and do. Case and point this one gentleman I recently started chatting with. 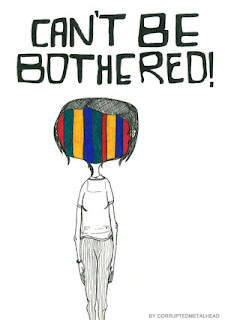 Let me give you the back story. We met at an event and I tried to recruit him to volunteer with my program. I think he took that as a sign of flirting which led to him engaging me in e-mails on the regular. Since I NEVER date, I figured this would be a good opportunity to work on my relating skills with the male species. Bad idea. He's starting to work my nerves on several levels.

He e-mails me too much. I don't like talking via e-mail all the time, especially at work. It's as irritating as text messaging to me. How can I connect with a person if they don't call me? When he does call it's from his work phone. Me thinketh he doesn't have a cell phone, and that's a red flag. Serial killer alert. Also his grammar leaves much to be desired. See that's the downside about e-mails and texts. If you can use know versus no or too versus to I get irritated (OK my daddy has this same issue, but I love him more than any man and accept him flaws and all).

Perhaps my biggest issue is he seems to expect recognition for something he didn't do. Apparently this weekend he attended a Christmas party. This led to an annoying conversation on the subject. Below are parts of it.

“Was going to invite you but couldn’t get in touch with you,” he said.


I responded with “I think saying, ‘Oh I was going to do soandso for you but soandso happened,’ is lame. If it doesn’t happen then why bother mentioning it? It’s like you’re fishing for a compliment.”

“Please don’t take it that way. I’m not fishing for anything. Seems that kind of upset you.”

“Lol you seem to think I get upset easily. I merely say what I think about situations. Maybe that wasn’t your intent but that’s how I see it. It’s not a trait unique to you. Other people do it all the time, and I tell them when it occurs.”

“Would you have came if I invited you? Be honest.”

“You are straight forward with everything no cutting corners and no sugar coating that’s good just makes me respect you even more.”

There was just so much wrong with this whole conversation. Had he really wanted to invite me he would have done so. He didn’t put in an effort to call me. Am I supposed to give him a hero cookie for thinking of me, but not really? There is no A for effort for an activity that I didn’t know about prior. I am unable to validate his intent to really invite me because it never happened.

And who invites people they barely know to their work Christmas parties? I’m now slightly inclined to believe he is a serial killer. He has no phone. He wants to, supposedly, invite me places. I could be turned into a lampshade messing with him. Finally don’t tell me you respect me even more. Show it. I’m of the show not tell mindset. My daddy says I'm somewhat rude. I am. It's because I can't be bothered.

Email ThisBlogThis!Share to TwitterShare to FacebookShare to Pinterest
Labels: Dating and Relating