It's a new year which means Writing Wednesday is back in full effect. I promise to do so much better than last year which featured numerous bouts of disappearing (blame it on my chronic sickness). One of my goals for this year is to be healthier. That should translate to writing regularly and not owing the Writing Wednesday Pot. Also I plan on writing an additional post at least a few times a month not on Writing Wednesday. 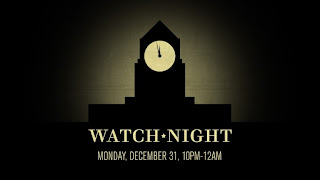 For 2013 I decided to take it back to the Old School for my New Year's Eve celebration. Instead of partying it up I went to Watch Night Service at church. A watch night service is a late-night Christian Church service held on New Year's Eve. Watch night service is especially important to the black community because many slaves were said to have gathered in churches on New Year's Eve,in 1862 to await the Emancipation Proclamation being enacted on Jan. 1, 1863.
In addition to the normal singing, preaching and so forth that take place at a worship service many churches offer and opportunity for people to testify at watch night. At the church my dad pastor's he no longer does an open call for testimonies. Mainly because people just don't seem to understand what is a testimony. Such was the case at the service I attended.
One woman got up and told us of how back in 2001 she went through so many trials and tribulations but the Lord brought her through. Ma'am I'm glad Jesus was a fence, but surely He has done something a little more recent in your life you could share. The call was for recent testimonies. Maybe I have a different definition of recent. To me something happening more than 10 years ago is not recent.

Another man's testimony was he was thankful for his mom, dad, nieces, nephews, brothers sisters, dog, cat, etc. Did I miss something? What part of that was a testimony? Correct me if I'm wrong, but a testimony describes a specific event in your life in which God has done something deemed particularly worth sharing. Per Wikipedia, "All testimonies should be well thought out and truthful."

I thought about throwing my hat in the ring and "testifying" that God had let me see another birthday just the day before. After all the Death Angel was constantly chasing me throughout 2012. I was sick almost every month during the year. However a woman who was turning 76 in 2013 beat me to the punch and got up and said her birthday was coming up. Maybe next year if I attend watch night service I'll have a legitimate testimony. Hopefully those who give a testimony will have one as well.
Posted by TONI at 1/02/2013 10:05:00 PM