I luh God but not today's gospel music 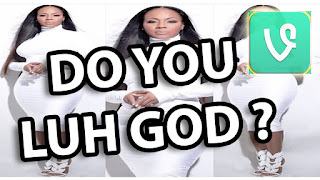 It's officially! I'm old. I was led to this conclusion after hearing "I luh God" by Erica Campbell for the first time. Actually in full disclosure, I did listen to the first 10 seconds a few months ago. I couldn't take it. Today I watched most of the music video. I hate the song. Like literally hate it. I remember joking with my friends a few weeks ago that Jesus did not die and rise again for us to sound like we're in the trap.

What happened to the days when Kirk Franklin was too radical for everybody? I remember when "Stomp" had all the old Christians up in arms. Typically I liked Kirk Franklin's music. The only time I wasn't into it was if he sounded too worldly. One of his early songs had a chant, "Go Jesus, Go Jesus, Go!" That called to mind too many main stream rap songs. As a child I always used to think there was a distinct separation between "church music" and "world music." It wasn't necessarily because of anything my parents said. I've just always had my own ideas of what was or was not gospel music.

Maybe my mindset is wrong, but when I'm going thru, I don't want to hear something that makes me want to join Twerk Team International. Are we twerking for Jesus now? These days I can't tell if people are singing to God or man with some of the gospel songs out. Some days I just rather listen to the old school R&B station instead of suffering through these gospel songs. Am I too old fashioned in my thinking?. Who am I to say how gospel music should sound?  It is my prayer that every song offered to God is divinely inspired from a person who's heart is in the right place. But shouldn't we offer a little more reverence in our songs to Him?
Posted by TONI at 6/11/2015 03:47:00 PM